Differences in erosion among the high islands also correspond to the differences in their ages. Kauai, the northernmost of the high islands, is about five million years older than the Big Island (Hawaii), and the disparity in their age is indicated by differences in the predominant profiles of their streams.  As flowing water cuts down through the lava substrate, streambeds generally become less steep, and the streams have fewer large waterfalls and a greater development of estuaries – sites where fresh waters and the ocean mix.  Eight stream types have been designated for Hawaii on the basis of size, shape, bay development, and slope (Figure 1).

Figure 1. Diagrammatic key to the classification of Hawaiian streams from significant morphological features (from Parham, 2002)

Indigenous aquatic animals are remarkably species specific in the habitats they select as adults, and these habitats are distributed differently among stream types.  Biological comparisons between different stream types must include an understanding of the relationship of stream morphology to the animals’ behavior and ecology.  If not, there is no way of knowing whether the absence of certain native species in a study stream is natural, i.e., to be expected, or caused by human activity.

Difference in the overall stream type, locations of barriers within a stream, and habitats within a stream are important to the type and number of stream animals observed in a stream. Some of these differences are apparent when viewing the stream from different distances. For example, when flying in an airplane at the front of the watershed and looking upstream, the overall shape and location of large waterfalls is observed (Figure 2). When one hikes along a stream, different habitats become obvious (Figure 3). 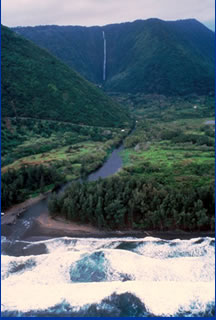 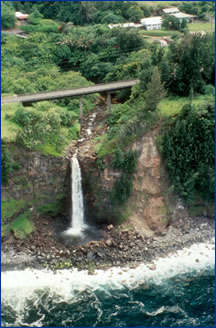 Figure 2. Notice the difference in the location of the waterfalls. On the left, the waterfall in Waipio Valley, Hawaii is toward the back of the watershed, while on the right in Waikaumalo Stream, Hawaii the waterfall is located at the front of the stream. The presence or absence of a barrier changes the type of animals observed in the stream. 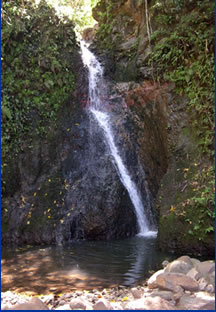 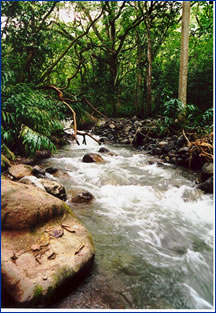 Figure 3. Notice the difference in stream habitats. On the left a small waterfall and plunge pool are two different habitats, while on the right the swift water of a stream riffle provides another different habitat. Different species may live in different habitats, and the availability of the habitats affects the number of species observed in a stream.

As you navigate this site, you will find the content for much of the Atlas is stored in linked pdf files. We recommend that you download a copy of the Key and Legend in addition to any watersheds of interest so that you understand the details of the information presented in the Atlas pages.

Additionally, this Atlas is linked to the DAR Aquatic Surveys Database so that the Atlas can be updated as new information becomes available. We plan to replace files periodically with new versions.

Finally, as we created this 4,500+ page Atlas, we corrected errors we found in the DAR Aquatic Surveys Database and this Atlas. Please feel free to contact us with inconsistencies or additional information you may have. Our intent is to provide the most up-to-date and accurate information as possible, and your help in insuring this would be greatly appreciated.